The following album is now being promoted on our reggae music internet radio station. 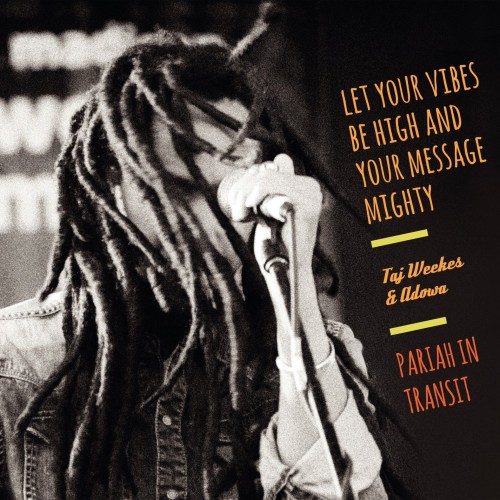 When the best roots reggae music made on islands outside Jamaica is mentioned, most people’s attention falls on the Virgin Islands: the didactic seminars of Midnite, the broken toned roots-pop of Pressure, the quavering unity pleas for Ras Batch. But a share of the acclaim is also deserved by St Lucian-born Taj Weekes, who has harnessed the poetic spirit of a Derek Walcott to a Bob Marley rebelliousness and a haunting voice like its frequent subject matter: the child hardened and wise beyond his years.

Fans of his albums with NYC based group Adowa, ‘Hope and Doubt’, ‘Deidem’, and ‘A Waterlogged Soul Kitchen’ will know that they are ruthlessly consistent in the recording studio. However, many followers outside the US will not have witnessed their live shows (at the time of writing Weekes has had to cancel a date in Paris due to foot surgery). A 2008 recording of an appearance at Mexico’s Taos Molar festival remedied this to a degree. But now Weekes has announced ‘Pariah In Transit’, a forthcoming album recorded at various venues across the Northern American countries, which United Reggae has been sent as an exclusive preview in un-mastered form. The title, according to Weekes, refers to his perceived outsider status in the reggae industry and the hustle and bustle of travelling the lands purveying their musical wares.

The majority of the songs are from the ‘Deidem’ era and represent Weekes’ writing at its most musically and lyrically bleak. The only major key selection is post Hurricane Katrina reaction Rain Rain (on ‘A Waterlogged Soul Kitchen’ he began to marry harrowing messages to more optimistic sounding melodies – allowing them to sneak under the radar into people’s lives). Drummer Cornel Marshall slows down and speeds up the tempo record-turntable-style on the predetermination ska of Since Cain (interestingly this month’s outstanding debut from Jamaica’s Jah9 features the same trick) while the rhythm to eschatological stepper For Today seems to float on air. There is nothing that roots purists would call inauthentic about this music – but Taj and Adoni Xavier’s dual guitar attack and unique sense of lyrical complexity and minor key gloom, make this reggae that many a rock or metal fan could embrace. he album starts with a Santana Black Magic Woman-like crescendo that opens Angry Language – and closes with the full-on axe shredding of final track and affirmation of Selassie’s divinity, Scream Out.

Captured in small venues through the mixing desk, the sound is remarkably clear (although this comes at a price – the crowd is only really heard between the songs). Some of the performances feature Chris Laubourne’s saxophone and some don’t. In its current state it all sounds a bit quiet when part of a digital mp3 player’s loudness war – which will likely be resolved when the mastering is done. In fact, the only real criticism is that more tracks from ‘A Waterlogged Soul Kitchen’ could have been featured as the set-list is quite similar in places to the Taos Molar show.

Considering the wealth and depth of meaning in Weekes’ and Adowa’s work this review’s conclusion is a comparatively prosaic one: that they can deliver what’s on record on stage. For some years now live reggae music from Jamaica has been enthusiastically celebrated. This should be too.